Almost every family has their traditions for New Year’s. My Mama instilled in my brother and me the tradition of making black-eyed peas and collards. As with a lot mothers of the South, these legumes and veggies, respectively, were never from the can. So as homage to my Mama, that’s what we’re going to do today! If your heart just pumped a little bit of kool-aid, calm down, it’s going to be easy!

Why do people eat black-eyed peas for New Year’s?

Traditionally in the South, you can find most veggies and legumes cooked with some type of pork in it for flavor. We’re going to change it up, but we’ll still have all the flavor!

Are any special cooking instruments needed?

You’re definitely going to need a slow cooker! They make all kinds nowadays, you have the analog/manual ones or you can shoot for the moon and get a digital slow cooker. Either way you’ll get your money’s worth and it’ll definitely get the job done! When reheating my slow cooker black-eyed peas, I prefer to do it in a cast iron skillet…so good!

If you have reservations about cooking your black-eyed peas in a slow cooker, you can always cook them slow and low in a wonderful Dutch oven.

Let’s get to it! Remember, if you ReCreate this recipe rate and comment below and tag me in IG: macnificentrecreations.

To make a vegetarian/vegan option of the slow cooker black-eyed peas, replace the smoked turkey necks with veggie base or veggie bouillon – add it in an hour or two before their done. 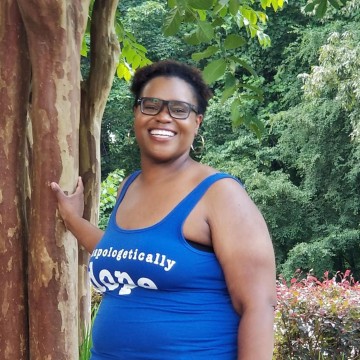 I'm a Southern woman who loves to recreate and share the things I've baked and crocheted. I'm a straight shooter who can be sweeter than a nice cold glass of sweet tea, but I also have a mouth that can be slicker than vegetable oil. But I have a big heart (don't tell anyone). Oh, and did I forget to tell you, I curse a little? I'm playin', I curse a lot.

I believe in sharing my creations and recreations so you can make them your own. I hope you're encouraged to do the same! Don't Stop Now…

We've got you covered...Get emails when new posts are available!

MacNificently ReCreated, And Creatively Yours.